Last week we were visited by the Sars Camogie Team who were the winners of the County intermediate Championship for 2014. They beat Brian Dillons from Mayfield on a score line of 2-14 to 1-5 which means they will play at Senior B level next year. Past pupils of Brooklodge NS on the team include the captain Emer Fennell (O’ Farrell) who has also won numerous All Ireland medals with the Cork Senior Camogie Team, Chloe Casey who is the current Cork Minor Goalkeeper, Emma Casey, Lauren Casserly and Nicole Hickey. Miss J Murphy was also playing and Miss E Murphy cheered the team on from the sideline. We hope she’ll be back training with us in the new year! The team were overwhelmed by the level of support on the day of the match, from many young future Camogie stars who are going to school in Brooklodge! 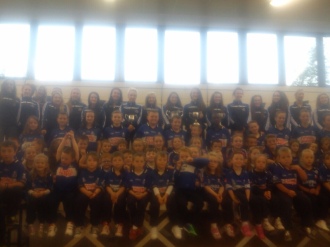 This entry was posted in Uncategorized and tagged PE, school visitors. Bookmark the permalink.